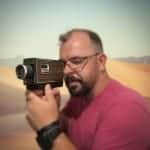 Gio Toninelo was born in Brazil. He studied graphic design upstate New York and started his film career as video assistant at Incite Films in 2003.

In 2007, he undertook his first production role for Rocket House Pictures. In 2010, he produced Pastrami on Rye, for which he received several animation awards.

Toninelo has had a successful professional run as producer and cinematographer exploring and photographing the State of Colorado for commercial, editorial assignments, and non-profit organizations.