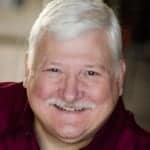 T. David Rutherford, the 'T' is silent, has performed on stage, on camera and behind the microphone for more years than he cares to admit. With credits in radio, voice-overs, commercials, industrials, and independent films, he’s performed professionally since 1990. He has been seen at the Aurora Fox, Town Hall Arts Center in Littleton, Country Dinner Playhouse and other venues in Colorado and Kansas. David has a number of audiobooks that he has voiced which are listed on Audible.com