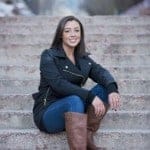 Sara is originally from Northern Virginia but currently lives in Colorado Springs, Colorado. After years of working for a large financial corporation, Sara decided it was no longer for her. She quit her corporate job and decided to pursue her passion for beauty. Sara attended Colorado's International Salon and Spa Academy where she completed and received licenses in Esthetics and Barbering.

Sara began working in Television and Film in 2016. She has held positions as a special effects makeup artist, hairstylist, key makeup artist, set costumer and costume designer for various films. Sara loves being on set and hopes to continue her career in film for many years to come.