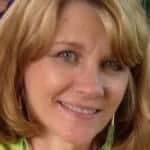 For over 25 years, Sabrina has owned and operated TKO, Teleprompter Komputer Operators, a teleprompter operator and equipment service for video, film and live audio-visual shows.