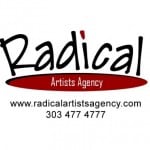 MISCELLANEOUS: Radical opened its doors in 2005 and has come to be known as "The Actors Agency" in this region. Kathey True has 20 years of industry experience.