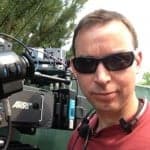 I've been working in video and film production since 2001. I was a member of the International Cinematographers Guild (IATSE Local 600) while working in New York from 2005-2011. Since moving to Denver six years ago, I've continued to work as an AC and digital loader. I also work as a camera operating and videographer. I've also produced two short films of my own.